I remember attending this game, with Dad, Uncle Mark and Bob but I don’t remember the game specifics.  I do remember learning how to score a game from Uncle Mark.  I had never seen that done before.

This was the year of the brand new Shea Stadium opening along with the Worlds Fair.  It was a big deal.  During the game, Uncle Mark bought us Mets pennants to wave and you can see up walking out with them in this video.  Wow!  That was a big deal. [the date of this game was originally listed in error as Aug. 2]

[scroll to the bottom to see the video and my scorecard] 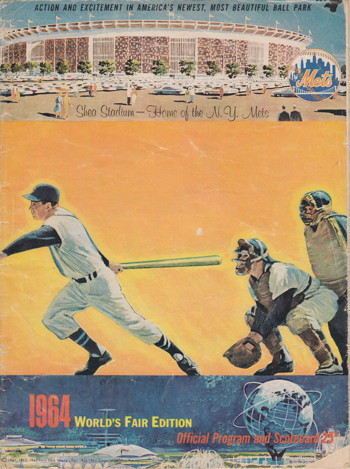 Using the online reference at baseball-reference.com I believe I found the game we attended.    There are 4 separate baseball plays filmed and I was able to match up the plays in the sequence filmed with a box score from August 2.

In the first play of the baseball section of the video, we see a player wearing a blue jacket being forced out at second base.  If he was wearing a jacket, then he had to be the pitcher.  We also see the first baseman in a visiting grey uniform wearing number 14.  This led me to believe it was a Cubs game because Ernie Banks wore 14.  Looking for a Mets/Cubs boxscore in mid-summer of 1964, I found the one for August 2.  In the bottom of the 3rd the Mets pitcher, Gary Kroll, singled and was then erased by a shortstop to second baseman force out to end the inning, just as we see in the video.  So far, so good.

In the next play,  we see the Cubs turning a 6-4-3 double play inning ending double play off the bat of Bobby Klaus. George Altman, formerly of the Cubs, hit a pinch hit single to get on. The box score shows this happening in the bottom of the 8th inning.

The next play shows a player caught stealing at second base.  You see the first baseman running in to cover a bunt.  The box score shows that in the top of the 9th, Andre Rogers was on first via a walk.  Then the  starting pitcher, Larry Jackson, was involved in a strike ’em out, throw ’em out double play. Likely a missed bunt attempt.  On that play, we also see the second baseman, number 33.  That is Ron Hunt – the only legitimate star the Mets had that year.

On the last play, we see a Met sliding into third base.  This one is a bit tricky to analyze as there were two occasions in the bottom of the 9th were a Met was stationed at third.  Ron Hunt led off the inning with a triple.  He scored on a single by Joe Christopher. Later in the inning, Christopher got to third on a single by Jim Hickman.  It is really hard to tell in this video, but the player sliding into third appears to be white.  Joe Christopher was a black ballplayer, so based on this thin evidence I’m saying the video is showing Ron Hunt’s triple.  If I’m wrong, who cares!  I had fun sleuthing this down and now I can add Ernie Banks to my list of baseball greats that I’ve seen play. 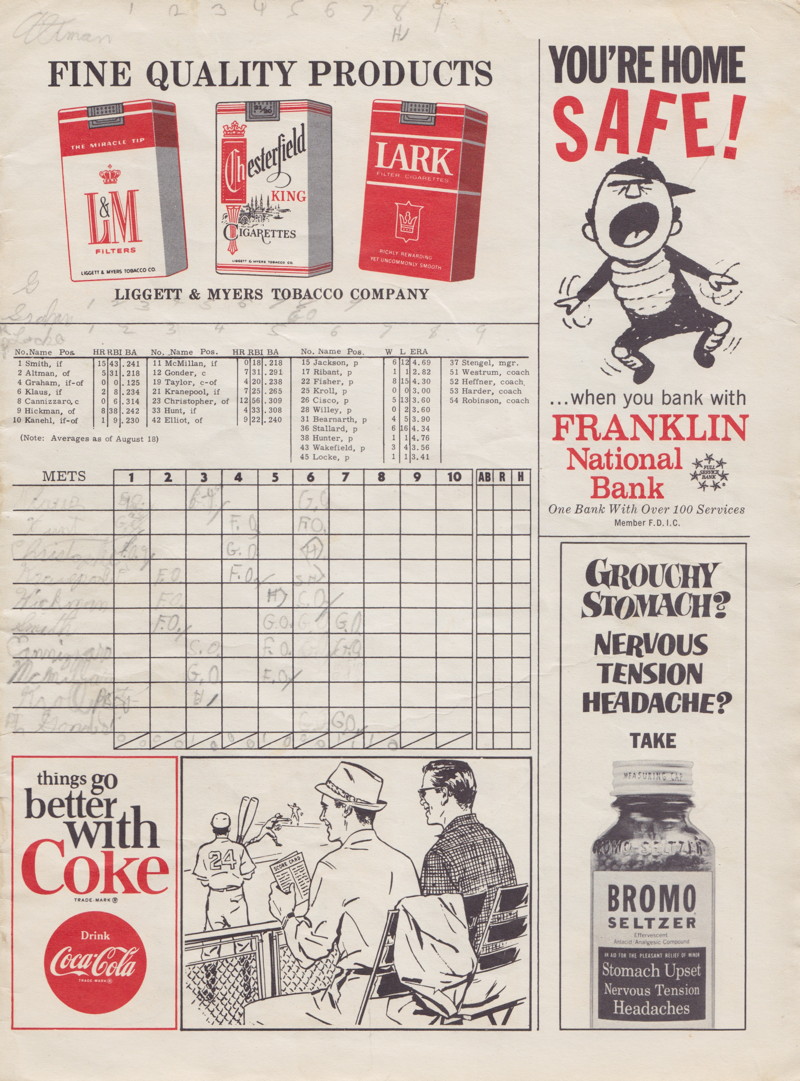